So along with my depression, I have developed a bit of anger issues. I’m not an angry person, never have been. I was always the shy, quiet, hide behind the shadows type of person. I’ve done a pretty good job of hiding it because no one really notices it but me. Even when I did get mad, I would give the silent treatment. Lately it’s been quite the opposite.

I get that we all have those annoying coworkers who don’t know what they are doing and get on your nerves, but usually you can move past it right? You’re used to it, it’s expected, it’s not going to change. Yet I find myself becoming consumed with anger and frustration over the smallest things that I know they are going to do. So is it that they just got on my last nerve or am I really blowing things out of proportion? For instance, my fellow coworker gives me an incomplete property setup (which she has always done in the past) and I’m here slamming things on my desk, throwing pens or whatever, jamming my pen into a pad of post-it notes and trying to control myself from going over to her desk and yelling at her for the missing information. I mean COME ON! How long have you worked here and you can’t seem to give me complete information?!? Okay, calm down. I knew she was going to do that. I always had to do the second half of her job for her anyway. That was only one instance.

At home, it’s sad, my dog Mochi gets yelled at for no reason. I all of a sudden get in one of my moods and because she isn’t walking as fast or the way I want her to walk and she’s just being a dog and sniffing everything in her path. I start yelling at her and tugging at her leash to make her catch up to me. She’s just being a dog, going for a walk. That’s it. She didn’t do anything wrong and she’s getting reprimanded. 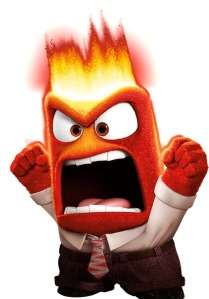 I can’t control it. I just get into these angry fits and lash out at the first thing that gets in my way. I’m on mood stabilizers but I don’t think it’s doing what it’s supposed to otherwise I wouldn’t be writing this. It doesn’t seem like much but I know myself and this is not me. I’m not an angry person. It used to take a lot to make me angry, now it’s almost as if anything will make me angry. People don’t notice it either because I’m almost always alone when it happens with the exception of work. But I feel it, there is a change in me and I don’t like it. It’s not something I want to get used to either. I don’t want to be known as an angry person.