So I just got back from my Hawaii vacation almost a week ago. I got away with one injury. I don’t know if you would call it major or minor, or if it would actually be called an injury. Anyway, how it happened… It was the last day of our vacation. My mom and I went on a kayak and snorkeling tour. We were out in the middle of the ocean, miles and miles away from the shore and at least 20 feet deep to the ocean floor, I think. Sorry I don’t have pictures of any cool fishies. I came up for air to fix my snorkel gear and was just swimming around and all of a sudden I felt a sharp pain on my right rib, twice. I screamed out loud because it hurt that bad. I don’t exactly know what I did, maybe twisted the wrong way? Then I went back to swimming as if nothing happened. We finished our tour and I dropped my mom off back at our condo.

Then I went on a two and a half hour drive to the southern most tip of the island called South Point. I was about to go cliff jumping into the ocean but, there was no way back up so I didn’t. To be honest, I was a bit scared to jump off a 40′ cliff, not to mention the strong current waiting for me at the bottom along with jagged rocks, but the views were incredible. 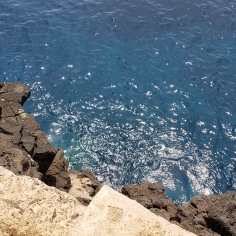 Edge of the cliff to jump from 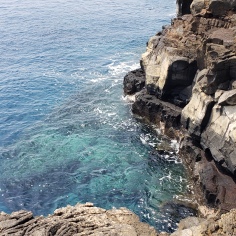 a little further out

view to the left

After that I went and hiked a what seemed to be a never ending two and a half miles of dirt road to the famous green sand beach. That was not an easy hike! I went through two water bottles! There was the option of their shuttles going to and from the beach but I decided to tough it out. It was definitely worth it, minus the feeling of, am I lost? a couple of times. HAHA Went down to the beach, played in the sand for about twenty minutes then hiked back up to the top. I decided to take the shuttle back to the beginning since I drank all the water that I had taken with me and I didn’t want to get lost going back. And it was only $10. I gotta tell ya, that ride back was like being on a roller coaster with no restraints! I was on an ATV with no seat belt. Felt every bump, dip, rock, and whatever came in front of this vehicle while only holding on to one bar and trying to keep my balance and not crash into the other passengers on the back of this pickup truck. That went on for a good twenty to thirty minutes. We eventually made it back to the beginning of the trail, talk about a rough ride! Then I drove home. 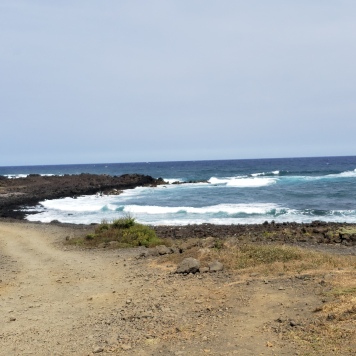 The beginning of the dirt road 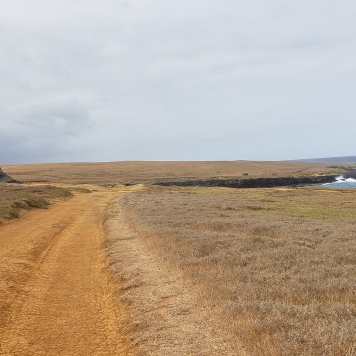 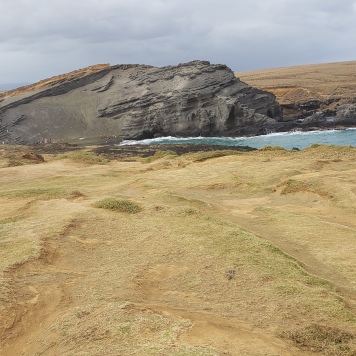 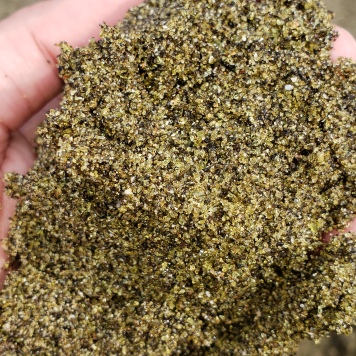 So between the kayak and snorkeling, swimming in the ocean and then hiking two and a half miles and the makeshift ATV with no restraints, I somehow ended up with bruised ribs, if that’s what you call it. The next morning I was in sooo much pain. It hurt to move whichever way no matter what I did. I don’t know how, I just know that the right side of my ribs hurt like hell and were sore to the touch. It got worse the more I moved. Of course the next day we were headed home. The days that followed seemed like the pain got worse. On Wednesday, it felt like I was getting better. I could move around more freely. There was still some pain but it was tolerable. So of course I didn’t mind it and forgot that there was any pain and of course I would over exert myself with lifting heavy things not thinking about the consequences. Today, it hurts again. I can still move but not as much as yesterday. People tell me to take it easy and I’m like, what is that? I’m getting better, it’ll be fine. Of course I’ll pay for it later. HAHA I never learn.

So I guess in the end, I had a great trip. Nothing like a battle scar to tell you that you had a great vacation and enjoyed every minute of it! Let’s do that again! Maybe without the injury this time? But wait, that’s the indication of a great trip! HAHA just kidding. Or not! You pick.