Every time I am asked the question “What do you want to do?” my answer has been and always will be and I will quote from the movie Ever After when the prince asks Cinderella “is there anything you don’t do?” and she answers back in  the most  satisfying confident way as she looks up at the sky and closes her eyes and spreads her arms wide open, “FLY.”

The good news is that I’ve gotten to FLY (sky diving) 3 times already and would do it over and over again. To feel so free, to fly with the birds, to be closer to the sun, to be so high off the ground, to hear peace and quiet thousands of feet in the air; there is nothing quite like it.

The first time, I think in 2009, was for a friend that was supposedly going to move to Thailand for good and it was his goodbye party, sort of. We went to the one in Temecula. Signed up for the entire package, video, pictures and all since it was our well my first time. Didn’t think I was going to do it ever again. We suited up and got our pre flight training. Off to the tiny dinky little plane we went and they managed to shove 20 people in there like sardines. You get the divers, the professional jumpers, the camera crew, and a few extras training or just doing it for fun. One by one we fell out of the plane. It was funny hearing my friends scream die out as she fell further away from the plane and scary at the same time because that meant I was next. DUN DUN DUN there is no backing out now!

3 2 1 go fall out of the plane! Screaming didn’t last too long, free falling was kind of fun, letting the wind catch you and it felt like you were just floating in mid air not to mention all you skin flapping about HAHA HAHAHAHAHA Okay I’m just laughing at myself now… No really, that is what I saw and that’s what really happens. Oh wait, don’t forget to say

HI to your camera man! and oh yeah SMILE! Try doing that without having all the wind go into your mouth all at once… hahaha And now the guy strapped to your back finally pulls the chute. Oh so peaceful. We were having a normal conversation and just cruising around in the open air. That was the best feeling I’ve ever had I’ve forgotten that I just fell out of a plane however many thousands of feet off the ground. We finally landed and I was screaming and yelling WOOHOO YEAAAAHHH LET’S DO THAT AGAIN! I loved it so much that I even considered doing the training to get certified and jump on my own.

The second jump was in Taft, California. It was for my birthday December 2013. It was only two of us this time around. We get to the site and it was very different from my first experience. Small air space with no real solid buildings around. We checked in. They geared us up. We were kind of scared since the weather didn’t look so good. Mid December, cloudy skies, not your ideal forecast for skydiving right but they still booked us anyway. We see this tiny little plane come in and it looks questionable. It was one of those small planes that have the propellors on them. It looked like they pulled the back seats off and laid carpet on the floor. You could probably only fit about 5 people in there. On the inside, there were parts held up with duct tape, scary. But off we went. As we ascended higher, we were flying through thick clouds, we couldn’t even see above or below them. We get to our altitude and we are ready to jump out of the plane. My friend 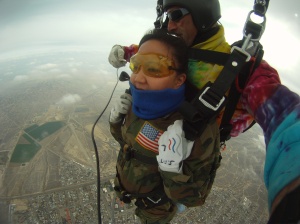 went first. Oh and the cameras were just attached to our jumpers wrists. It turned out that the camera on my friend’s jumper was not working so they were sitting at the edge of the plane trying to fix the darn thing. Oh and by the way, my friend is afraid of heights, imagine that. And there they go. I was next. We fell out, spun a little, fell through clouds, sleet, some rain, it was freezing cold I couldn’t even pay attention to the view. The next thing I knew we were on the ground. Still was fun, but not the same as the first. Nice way to spend my birthday.

The third time was in Oceanside with some church buddies. This one was, I guess you could say, extra special. A week before the jump, I found out that one of my best friends from college passed away ( I wrote about it in one of my other blogs “loss of a special friend”), 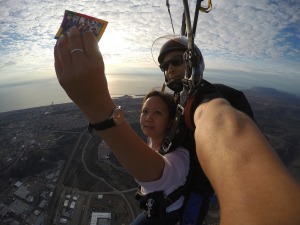 I didn’t know if I was going to do the jump or not. Some people told me I shouldn’t go, some people told me I should because it would help get my mind off of things. I did it anyway and I’m glad I did. I took one of our old pictures and wrote a message on the back of it and had planned to let it go mid air. The cool thing was I told my instructor about it and he was like sure and caught the whole thing on camera. The best part was the jump was during sunset overlooking the ocean and I got to say goodbye to my friend in a way I thought she would appreciate.

I suppose I should’ve written about this some time ago since it is something that I truly enjoy, but it’s okay. I never thought I would ago skydiving once, let alone three times.

I LOVE TO FLY and I will continue to do it over and over again.